Co-operative Globalisation, calls for the restoration of humanity to the centre of our economies – The Rome Roundtable 15&16 June 2018 – The Global Foundation: “Together, we strive for the global common good” – Address of His Holiness Pope Francis – Keynote of His Eminence Cardinal Pietro Parolin – Remarks of His Excellency, Archbishop Paul Richard Gallagher 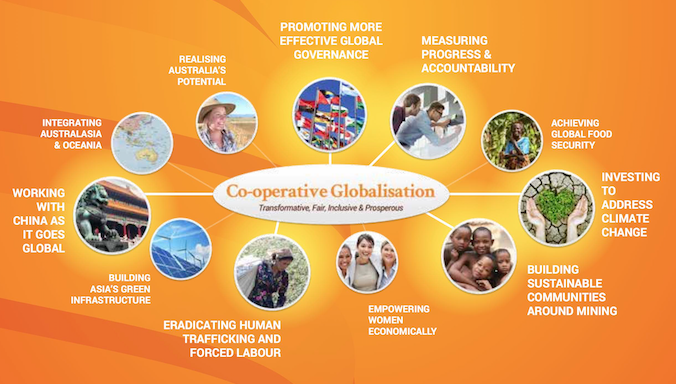 - in March on organ transplants

- in June on common values between China and Christianity.

The first Plenary Session was entitled “Towards a 21st Century Dialogue of Civilisations: The New Silk Road”

Cardinal Parolin was quite explicit on this issue at the Keynote address he gave on Friday evening at the Headquarters of the Bank of Italy.

Archbishop Gallagher, at the Opening Session, asked for “a sustained commitment […] so as to promote a person-based and community-oriented cultural process of world-wide integration that is open to transcendence” and “to steer the globalisation of humanity in relational terms, in terms of communion and the sharing of goods” and asked for “structures of solidarity”, stressing the “imperative” and “urgent” character of co-operative globalisation.

Finally, we have to take into account the very important objectives set by the Vatican for this Roundtable and the economic and business issues in the world in general. Vatican’s message to the Rome Roundtable was transmitted through:

You will find the content of these objectives in the extracts of each intervention below.

Before all else, I would restate my conviction that a world economic system that discards men, women and children because they are no longer considered useful or productive according to criteria drawn from the world of business or other organizations, is unacceptable, because it is inhumane. For they implicitly accept the principle that they too, sooner or later, will be discarded, when they no longer prove useful to a society that has made mammon, the god of money, the centre of its attention.

In 1991, Saint John Paul II, responding to the fall of oppressive political systems and the progressive integration of markets that we have come to call globalization, warned of the risk that an ideology of capitalism would become widespread. My Predecessor asked if such an economic system would be the model to propose to those seeking the road to genuine economic and social progress, and offered a clearly negative response. Sadly, the dangers that troubled Saint John Paul II have largely come to pass.

We need to learn “com-passion” for those suffering from persecution, loneliness, forced displacement or separation from their families. We need to learn to “suffer with” those who lack access to health care, or who endure hunger, cold or heat.

Hence the need to devise a long-term global strategy able to provide energy security and, by laying down precise commitments to meet the problem of climate change, to encourage economic stability, public health, the protection of the environment and integral human development.  We know that the challenges facing us are interconnected. Yet we must acknowledge that the demand for continuous economic growth has led to severe ecological and social consequences, since our current economic system thrives on ever-increasing extraction, consumption and waste.

“The problem is that we still lack the culture needed to confront this crisis.We lack leadership capable of striking out on new paths in meeting the needs of the present with concern for all and without prejudice towards coming generations” (Laudato Si’, 53).

Dear brothers and sisters, I appeal in a particular way to you, as men and women so greatly blessed in terms of talent and experience.

Summary of the Keynote Address of His Eminence Cardinal Pietro Parolin, 15 June 2018 (Extracts)

The current global political situation could well fill us with worry and fear.

A theme that links several of the points that I have been asked to address is that of migration. Today there are two hundred and fifty-eight million migrants in varying categories2, of which sixty-five million are forced migrants. We know, however, that it is not unusual for international commitments, assumed by States on the basis of shared humanitarian concerns, to be disregarded and principles eroded.

In reality, these attitudes also reflect the decline of public confidence in the ability of Governments adequately to manage the phenomenon of migration whilst maintaining the levels of development achieved.

It calls for action on the causes of migration, which is, for the most part, the consequence of human decisions, be they political and economic inconsistencies, injustices, ideological impositions and the search for profit at any cost. As such, these could be resolved with an effective political will and a strong collective commitment to stability and peace.

I would like briefly to consider the question of human trafficking.

It is necessary to address the roots of inequality: the lack of education, discrimination and poverty, which give rise to it; and also to give adequate answers to the problems of wars, social inequalities, underdevelopment and economic degradation that penalise entire nations. Translated into numbers, we are faced with a vast and truly dramatic global phenomenon.

We must, however, take responsibility and, at the same time, ask why there is demand for “slavery” and examine the values that underpin the fabric of society.Tackling the root of the phenomenon means opposing that culturethat continues to tolerate, indeed has a degree of complicity in humans being used and treated as objects, for purely selfish ends and consumption. It is, therefore, necessary to ensure that the measures adopted correspond to a cultural commitment, and are not contradicted by a society that simultaneously favours the disintegration of the family, the suppression of life at any age, the violation of the dignity of women and children for immoral ends, black market labour and the uncontrolled trafficking of human organs.

Pope Francis has repeatedly warned against a new ideological totalitarianism that conceives of man only as an economic agent to be discarded when no longer useful: a sort of sub-culture of closure and rejection, with varying degrees of gravity, but always causing suffering. As Laudato si’ forewarns us: “a great cultural, spiritual and educational challenge stands before us, and it will demand that we set out on the long path of renewal.”8

Unfortunately, the globalised world in which we live has not always succeeded in unifying the human family; often it has born negative fruit with the dreadful consequences of driving wedges that create even greater economic and social division and that produce numerous injustices which too frequently result in political unrest, conflicts and war. “The world has become ‘global’: the economy and communications are, so to speak, ‘unified’. But, for many people, especially the poor, new walls have been built.Diversity is an opportunity for hostility and conflict; a globalization of solidarity and of the Spirit is yet to be built.

This immediately situates our discussion of globalisation, with its manifold dimensions and expressions, within the context of human morality, specifically within the framework of the moral obligation we have to live and to act in justice and solidarity with all of humanity.

Over the last years, some countries grasped for a “quick fix” to the problems of hyperglobalization– whereby, over three decades or more, the prioritizing of narrow financial interestshas created an unsustainable and inequitable world in which too many people in too many places were left out. Stagnant wages, dizzying levels of debt and recurrent financial crises are the most visible manifestations of a dangerously unbalanced world. Furthermore, rigged markets, corporate rentierism and a dearth of productive investments are also hobbling economic recovery and longer- term transformation.

In developing countries, these problems are compounded by premature deindustrialization, the diminishing opportunities for export-led growth and a heightened vulnerability to external shocks both economic and environmental. Persistent insecurity and inequalityare at the heart of the current malaise and the underlying cause of the loss of trust in the economic system and its ability to provide sustainable livelihoods and credible pathways to prosperity.

Corrective measures must also address the profound imbalances in bargaining power between capital and labour, and between governments and globalizing corporations, that have been allowed to develop in recent decades.

Many of the sources of exclusion and stratification have a large international footprint. Moreover, some of the tools needed to build a more inclusive economy have been constrained or even forbidden by international rules and agreements. Reviewing these agreements is a prerequisitefor ensuring that governments have sufficient space to adapt policies to local conditions and capabilities.

Hence, a sustained commitment is needed so as to promote a person-based and community-oriented cultural process of world-wide integration that is open to transcendence.” A second aspect that seems indispensable in our discussions these days is the necessity to have and employ clear ethical principles that respect and promote the dignity of every human being. Such an approach to life that seeks personal gain and pleasure at the cost of other or while trampling on the dignity of others is not acceptable.

Considering the numerous global challenges, especially those in the areas of global finance and economy, which put this solidarity to the test, there arises also the awareness that there is an “urgency” to this “imperative”; we must engage, we cannot not act, and such is the imperative.

The full texts of the Holy See Interventions are available here: 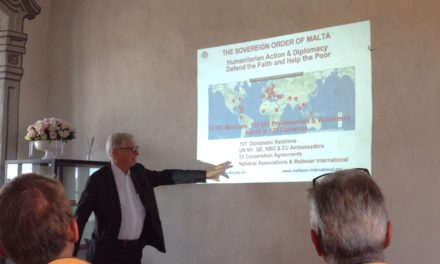 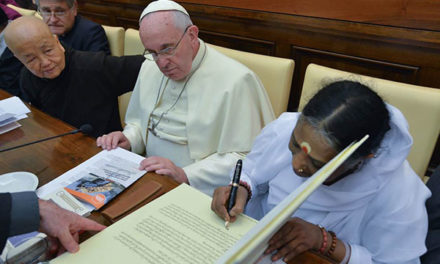 HOLY MASS ON MONDAY 2 DECEMBER – Day for the Abolition of Slavery, the Commitment of Religions 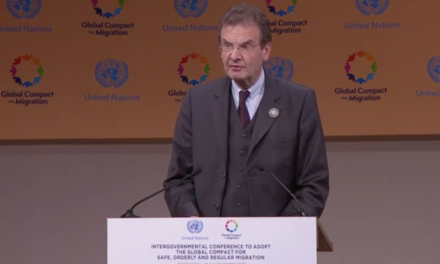 “Respect for the dignity of migrants and religious freedom must be a priority for all actors” – OM Grand Chancellor Albrecht von Boeselager’s Intervention at Marrakech Summit on Global Compact for Migration / 11 Dec. 2018